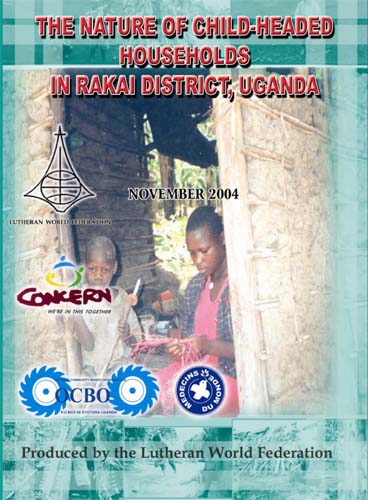 The nature of child-headed households in Rakai District, Uganda

This report is a result of a study on the situation in child headed households conducted by a team of development practitioners working for several NGOs involved with orphans and other vulnerable children in Rakai District. The rationale for this specific effort arose from the desire to get a better understanding of the magnitude of the Child headed household problem in Rakai District.

In the report, a situation analysis of children under the age of 18 who are heads of households is presented. A Child headed household is defined as that household primarily headed by a child (below the age of 18), but also recognized by the local community as being independent. In these households, the child takes full responsibility of all duties normally performed by an adult head in a conventional household. Apart from attempting to categorize the different types of Child headed households, the study goes further to understand coping potential and to investigate the accessibility of children living in child-headed households, to key basic social services from government and other service providers. Out of the data collected, a database on all child-headed households in Rakai district has been developed.

Many of the problems associated with poverty have been exacerbated by the HIV / AIDS epidemic. The first AIDS cases in Uganda were recorded in Rakai district in 1982 and today, the prevalence rate among adults aged 15-54 is estimated at 9.2% as compared to the national average of 6.3% despite strong efforts by government, mission groups and NGOs aimed at combating its spread. Although the available statistics reveal a continuous decline in HIV / AIDS prevalence in Rakai from 30% in 1992 to 9.2% in 2001, many challenging effects have been marked or identified such as orphans who have lost one or both parents. The study revealed that there are 975 CHH in the district many of which are headed by children below the age 18. CHH are categorised into those living alone (58%), children who have eloped to start families (11.6%), those living with invalid adults (23.8%) and CHH frequently visited by adult relatives. About seventy-six (76.6%) of the households are headed by males. Circumstances leading to the occurrence of CHH include among others, the loss of parents, abandonment, and juvenile delinquency and invalidity of surviving adults.