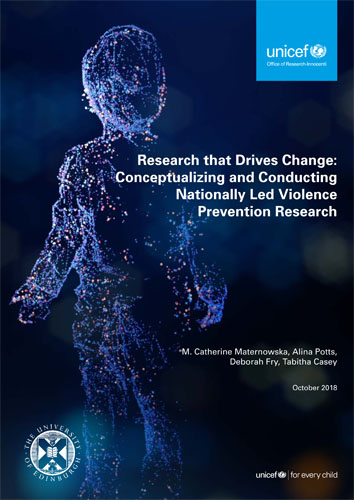 Globally, studies have demonstrated that children in every society are affected by physical, sexual and emotional violence. The drive to both quantify and qualify violence through data and research has been powerful: discourse among policy makers is shifting from “this does not happen here” to “what is driving this?” and “how can we address it?” To help answer these questions, the MultiCountry Study on the Drivers of Violence Affecting Children – conducted in Italy, Viet Nam, Peru and Zimbabwe – sought to disentangle the complex and often interrelated underlying causes of violence affecting children (VAC) in these four countries.

Led by the UNICEF Office of Research – Innocenti with its academic partner, the University of Edinburgh, the Study was conducted by national research teams comprised of government, practitioners and academic researchers in each of the four countries. Drawing on human-centred principles, the Study used an iterative approach which put national ownership and co-creation at its core. Government partners were actively engaged as co-researchers and all data analysis was conducted in-country by government statisticians. Facilitating and prioritizing national meaningmaking through dialogue and joint analysis and synthesis of findings was also a key part of the Study design.

The study findings, along with learning from the process itself, led to the development of a new child-centred and integrated framework, which proposes a process by which interdisciplinary coalitions of researchers, practitioners and policymakers can understand violence affecting children and what can be done to prevent it. Using data to drive change, our proposed Child-Centred and Integrated Framework for Violence Prevention serves to situate national findings according to a child’s social ecology, making clear how institutional and structural drivers and risk/protective factors together shape the many risks and opportunities of childhood around the world.

Shivji – The Concept of Human Rights in Africa

Violence Against Children
Scroll to top