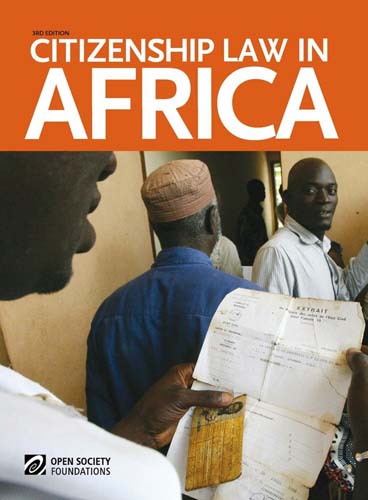 Few African countries provide for an explicit right to a nationality. Laws and practices governing citizenship effectively leave hundreds of thousands of people in Africa without a country. These stateless Africans can neither vote nor stand for office; they cannot enrol their children in school, travel freely, or own property; they cannot work for the government; they are exposed to human rights abuses. Statelessness exacerbates and underlies tensions in many regions of the continent.

Citizenship Law in Africa, a comparative study by two programs of the Open Society Foundations, describes the often arbitrary, discriminatory, and contradictory citizenship laws that exist from state to state and recommends ways that African countries can bring their citizenship laws in line with international rights norms. The report covers topics such as citizenship by descent, citizenship by naturalisation, gender discrimination in citizenship law, dual citizenship, and the right to identity documents and passports. It is essential reading for policymakers, attorneys, and activists.

This third edition is a comprehensive revision of the original text, which is also updated to reflect developments at national and continental levels. The original tables presenting comparative analysis of all the continent’s nationality laws have been improved, and new tables added on additional aspects of the law. Since the second edition was published in 2010, South Sudan has become independent and adopted its own nationality law, while there have been revisions to the laws in Côte d’Ivoire, Kenya, Libya, Mali, Mauritania, Namibia, Niger, Senegal, Seychelles, South Africa, Sudan, Tunisia and Zimbabwe. The African Commission on Human and Peoples’ Rights and the African Committee of Experts on the Rights and Welfare of the Child have developed important new normative guidance.

Agbu – Children and Youth in the Labour Process in Africa